As anything on social media goes viral, social networking websites need to introduce new features to impress users and stay viral (ahead of others) in competition.
After Facebook introduced Hashtags, something that was keeping Twitter ahead of Facebook and preferable over Facebook over social media advertising and marketing, Twitter has once again capitalized on hashtags, something that made it popular.

As noted by Livefyre’s Lead Social Strategist Nick Cicero, Twitter is offering suggested hashtags as you compose a tweet. 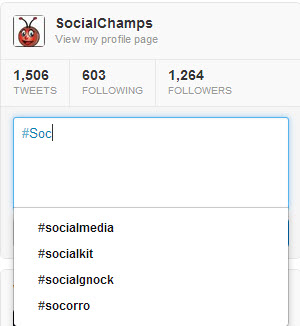 Third-party Twitter apps, including Tweetbot, have offered that functionality for a while now, as does the official Twitter mobile app.

Now Twitter suggests hashtags while you tweet. Since last week, when Twitter users enter a hashtag in their tweet, an auto-correct feature suggests hashtags and offers. This behavior has been around in the Android and iOS apps for a bit, but should now show up on the Web too.

Hashtags are more often than not the dominant content on the trending topic list on Twitter and lots of people use them to discuss current events, pop culture and a bunch of other stuff.
Instagram had been providing hashtag suggestions for long. A notable difference between the Twitter hashtag suggestions and those provided in the Instagram app are that the former preserve capitalization, while the latter does not.

How is auto-corrects suggesting hashtags beneficial?

At the time of this article being written, the official announcement of the new feature was yet to be made and therefore, it cannot be confirmed whether the new feature is available worldwide.

Have you used this new feature? How beneficial and helpful do you find it? Tell us.
SUMMARY:
Now when you tweet, Twitter will suggest hashtags would be relevant to your tweet. Let us see how helpful this new feature will be for Tweeters.