Even though as for now it’s a beta version, Google made this announcement on 16th September 2019, about introducing an update regarding Google Rich Snippet. It is supposed to determine whether some particular review should appear in Google search snippets.

Basically, here is the screenshot which states the difference between the result with the rich snippet and without rich snippet in the same window. 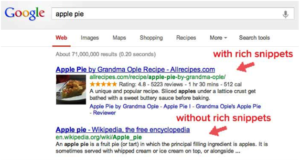 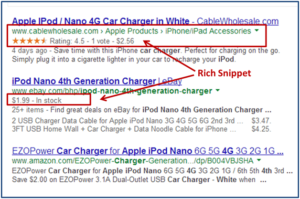 What exactly ha been changed according to Google’s announcement is, there are mainly four major changes mentioned, as follows:

The display of the schema type shall be limited. So for now, it will include;

So now henceforth whenever you have to put a review and ratings on Google about anything, say any product or service, then you have to put it with the name of it. Thus it will be shown on review rich results.

Not that your review will be lost or disappeared but the new update only stated that it will be required to write the “name” while writing a review.

Self Serving reviews will be avoided:

The reviews posted by the entity owning the website, by any third party app or widget or may be posted directly from their markup will no longer be considered by Google, here onwards. This will be of no use to the users in the updated version.

This is one of the important updates for the people in the business and publishers who use structured data for reviews.  To show up in the rich results, make sure the structured data of your website is updated as per the changes made.