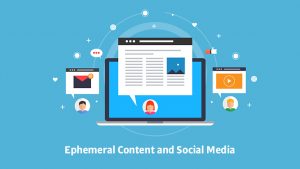 Starting with explaining the new term and then talking about how it is going to make a difference in Social Media Content would be perfect in terms of understanding the concept and application as well.

Basically, there is nothing rocket science in the understanding of the term ephemeral content as it is no new, though!

So you remember how the stories on Instagram and Facebook are there for 24 hours and then get vanished after it. The same has started happening with WhatsApp as well, known as status. This content on the internet that gets vanished after a particular period of time is known as the Ephemeral Content.

Of course, Snapchat started with this idea of vanishing the stories after a single or multiple watches. So here is all it started with the concept of creating content for viewers for a limited period of time. And then the immense success of ephemeral content on Snapchat, other social media platforms like Instagram, Facebook and WhatsApp made changes and place for the ephemeral content.

What else does come under this ephemeral content term is the ‘live videos’ of Instagram and Facebook, as even they stay in the stories for 24 hours.

Where the brands can make use of Ephemeral Content?

Now the best example of the brands using Ephemeral Content would be, Sony Pictures made good use of this opportunity at the launch of the movie Venom back in 2018.

Yes, the concept was used two years ago. So what exactly had happened was, they released the movie trailer on the Snapchat handle of Sony and also they asked viewers to book the tickets online in advance. Of course, now that content was ephemeral it got vanished after some time and automatically people who booked tickets then got it and were able to watch the trailer as well and the time-out happened for others who are late.

This is the ultimate proof that the ephemeral content was highly engaging the viewers in a diverse way. Also, this gave an idea that you can target your audience on a large scale at a particular time that you want. And this could be one of the ways that you can define your brand.

But here are some reasons why the ephemeral content is getting used by all big and small brands:

Interacting with the Audience:

The people who have a good number of followers on social media accounts are obligated, somehow, to upload the stories and keep their audience, viewers or followers entertained. So that these influencers make the ephemeral content or in lemon language, they create the stories that are interacting with audiences.

For example, asking for the validation for whether to go for coffee or Chai. Or right from which dress to wear, to which restaurant to go to for dine, or maybe anything and everything. This all includes taking polls from your followers, playing Q&A and right till just wishing them ‘Good Morning’ and ‘Good Night’ with a decent quote.

Also, one more example is the YouTubers do the interaction with their followers the same way.

The brands like Fastrack, DW, Caprese, and many more are running their ads on the stories by creating an ephemeral content. And how many times have you visited their ads while scrolling through the stories of your friends on Instagram?

And so this might have happened to you often when you are watching stories on Snapchat. There comes an ad of Bumble or any Gaming app. This is the ad created by the brands and shown to you.

These ads coming in between makes a good boost in the sale of the brand. As we do sometimes fall for downloading the Gaming app, as it seems interesting when we watch it for a moment.

The main purpose of uploading the stories and short content, apart from the main and regular feed content is to get introduced to the face behind the organization.

Letting your audience know this will make them trust your brand more and it also helps increasing the authenticity of all your claims.

The office tour on Snapchat will also help your audience or maybe posting templates for a fill-in for followers on Instagram or on Linkedin will also help you in terms of diversifying the content. And you can post the answers to it in the next stories. Things like this will indeed increase the followers and their interest.

People tend to judge the genuinity and authenticity of your brand and content more from the ephemeral content that you put on instead of the sponsored post updates on the feed.

So engaging your followers or audience with your content and them getting engaged the way you want is the huge achievement which tells you that your audience and you are from the same universe and you are in sync. Growing audiences and keeping them at the same pace as you are in the skill as well.

Posting stories, where asking your audiences to contribute to you in some or the other way is a great way of making an engagement with them.

Also, it is a good way of making a strong bonding between you and them. It does not only give you a good ratio of engagement but also a good way to build trust.

Also, what helps in your ephemeral content work out better is the fact and the millennial term FOMO. This stands for the social media term extended as ‘Fear Of Missing Out’.

So coming under the pressure of missing out on something is making people watch out your content no matter in however form it is.

And this FOMO is one of the reasons why the ephemeral content is growing faster and gaining authenticity as the real feed update. Also, this so called FOMO helps in getting more engagement and it gets consumed more than the regular content.

Still away from Algorithms of selective display of content’ like FB post can be seen by a handful of content due to FB’s algorithm of showing it to only relevant people. On the other hand, stories are open to all and hence make a better reach than other content.

Making use of it in endorsing your brand and running with new ideas in terms of the awareness and engagement of the brand is always going to be the best idea. And bringing out your A-game in planning creatively and executing will talk about the brand’s success.

The next big thing is you never know, it might be designing the campaign for some client considering the part of Ephemeral Content. The best thing to do is to make use of everything that is in the market and is a good acceptance by your audience. Because that is what is going to take you to success ultimately.

So let us know in the comment section below how else would you use the Ephemeral Content.