Google Plus Public on HootSuite

Google Plus public on HootSuite

Google Plus has been steadily growing as a constrained network, bounded by certain restrictions to be just social like Facebook. Google Plus Pages have not yet opened their API’s, for companies to come-up with third-party applications to use Google Plus.

However last year Google announced that six major companies were chosen as an official launch partner for Google Plus trial, those companies are  Hootsuite, Buddy Media, Context Optional, Hearsay Social, Involver, and Vitrue. But it was open for enterprise edition and a limited period trial for public and users were eagerly waiting for an open public launch.

Google Plus public on HootSuite

Today *HootSuite announced that Google Plus management will be available for over 5 million users worldwide.

(*HootSuite is a social media dashboard, which is used by the number of users and agencies globally for social channels management and measurement.) 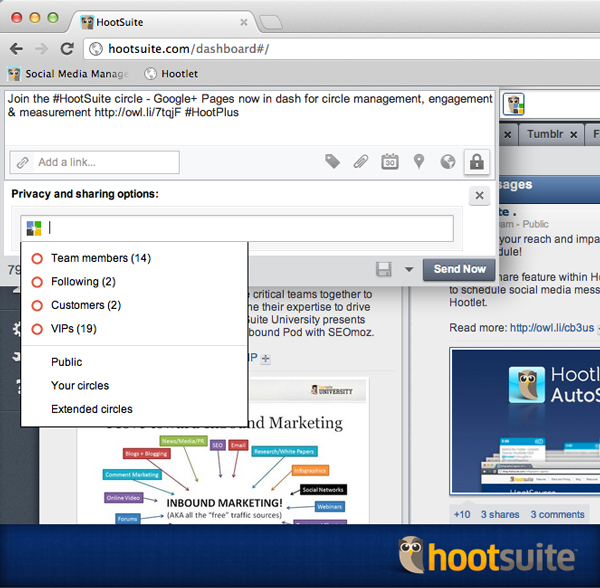 With the launch of Google Plus for the public, now the pages management would be easier for users. Scheduling of Google Plus posts would be possible (which was not possible earlier except for some browser-based extensions), filtering of feeds based on keywords, circles management and measurement of results will be easy.

Certainly when such options become easy accessible the acceptance of channel increases. I hope that soon Google Plus will also release its public API for enabling third-party integration for users and agencies.