The concerns regarding privacy on Facebook have been a subject of discussions and arguments on many occasions.

There is a page on Facebook titled “List of Pedophiles” where people share the names and addresses of convicted pedophiles that would help people living in the area of such offenders to stay cautious. However, some people argue whether this page violates the privacy of offenders as like other citizens, maybe lesser but they are also entitled to such privacy. The counter-view here is that the privacy of a pedophile cannot be more important than the safety of children.


Jules Polonetsky, director of the Future of Privacy Forum, said that the voting process was a “noble experiment” that did not lead to informed debate….

Facebook is the largest social media network in the world and it is paying a price for this because whenever there is any concern related to privacy, people blame Facebook for not doing enough to ensure user privacy.

Facebook has been coming up with many initiatives regarding privacy. In 2009, Facebook allowed users vote on privacy changes. Facebook went public and its user base ballooned from around 200 million to more than 1 billion. As part of the 2009 policy, users’ votes only count if more than 30 percent of all Facebook’s active users partake. That did not happen during either of the two times users voted. It is unlikely that it will now, given that more than 300 million people would have to participate. 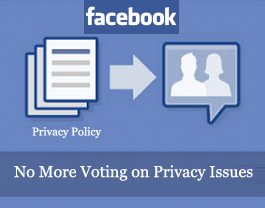 Jules Polonetsky, director of the Future of Privacy Forum, an industry-backed think tank in Washington DC, said that the voting process was a “noble experiment” that did not lead to informed debate.

Facebook Vice-President of communications, Elliot Schrage wrote:
“We will also provide additional notification mechanisms, including email, for informing you of those changes.”

In June, Facebook was reviewing how to obtain best feedback from users.
Facebook has also proposed changes to its data use policy, such as making it clear that when users hide a post or photo from their profile page, the “timeline,” those posts are not truly hidden and can be visible elsewhere, including on another person’s page.

Given the reputation that Facebook has and needs to protect, a user can count on Facebook that it would certainly come up with some great strategy to protect user-privacy and make its networking, more user-friendly.