Chatkazz (Indian restaurant based on Australia)

Cricket is a religion for Indians, leveraging ICC World Cup 2015 we planned the Foodie World Cup. A contest between the food items which involved users to vote and make their favorite dish a winner.

We launched the Facebook campaign inviting users to vote for their favorite dish. 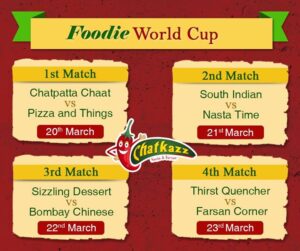 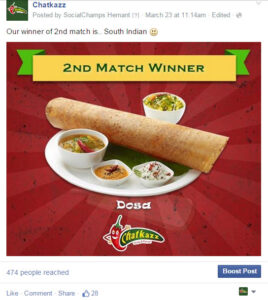 The contest was well – received as food lovers voted for their favorite food and engage with Chatkazz brand. The campaign was conducted for 10 days.

Total Interactions on the page (including likes, shares, comments, and impressions): 732